The brothers Fernando (1961) and Humberto Campana (1953) designed in 1991 The Favela Chair in a project that leads us to poetic and engaged provocations. Favelas are miserable but also creative communities in a country of contrasts as Brazil. Like the Brazilian film director Fernando Meireles, who launched in 2002 the film “City of God”, portraying crime and art in the Brazilians’ favelas, this chair also points out contrasts between aesthetics and politics. The film expresses that incongruity already in the title itself. Could that community really be from God? The chair designed by the Campana brothers refers to a throne made of rags, which brings us to an apparent irony.

But what does a Brazilian designer want by adding the concept of “favelas” to a chair? The chair is made of discarded wooden boards or of affordable pine wood. Its shape, which refers to a throne, contrasts with the simplicity of the material, and together these discourses promote an engaged and creative dialogue.

Favela chair is manufactured by the Italian company Edra. In 2011, while celebrating 20 years, it gained its miniaturization, produced by Vitra along with other famous chairs.

The Campana brothers can be considered the most outstanding Brazilian designers in the international press. They have numerous products awarded prizes in competitions and fairs. His creations are part of the collection of museums such as MoMA in New York, Center Georges Pompidou in Paris, Vitra Design Museum in Rhein and Pinakothek der Moderne in Munich. 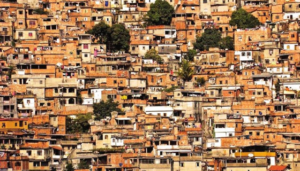