The Emeco 1006, also known as the Navy chair, is an aluminium chair manufactured by Emeco (Electric Machine and Equipment Company). It was originally designed for the US Navy during World War II., which needed a strong but lightweight chair for the deck of battleships that could withstand water, salt air and sailors. The chairs had eye bolts under the seat, so they could be attached to a ship-deck using cables. The chair is welded together from 12 pieces and is manufactured by hand through a 77-step process which includes forming, welding, grinding, heat-treating, finishing and anodising for superior quality and strength.

First built for use on submarines in 1944, the Navy Chair has been in continuous production ever since. After the war, Emeco started selling 1006 chairs to prisons, hospitals and government offices. In the 1980s and 1990s, it was popular for the restaurants, in the 2000s it became a designer chair. The Emeco 1006 chair is featured regularly in design magazines, its indestructible design and ‘industrial chic’ look makes it ideal for modern dining corners or kitchens. It frequently appears also in movies, as “the prison chair” especially in the interrogation scenes. 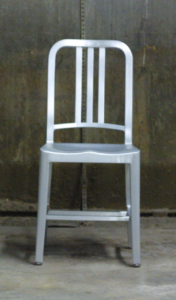