It is possible that shortly before lunchtime on September 1st, 1923, several guests sitting in a Peacock chair in the banquet hall of the Imperial Hotel in Tokyo felt the force of the earthquake that struck the Japanese capital. Conceived by Frank Lloyd Wright and opened a year before, the hotel was one of the buildings that survived the Kanto earthquake, as well as providing shelter for people whose homes were destroyed in the devastating event. This episode reinforced the aura of genius that haunts the architect.

Wright was in charge of the building’s design and its complex ornamental project -putting together Mayan Revival style, native Japanese elements, and geometric abstraction. In his design, he sought to capture an organic representation that would symbolize the relationship between East and West. The Peacock side chair is one of the pieces created by Wright that reflects this intention. Made from oak wood and leatherette upholstery that creates a great contrast, it has an octagonal seat and a hexagonal backrest. The hexagonal shape is repeated in the framework of the chair legs that are joined to the backrest through three elegant and simple wooden strips. These geometrical shapes can be seen again in the internal and external decorative elements of the building, possibly alluding to a simplification of the recurrent forms in Japanese art.

Nowadays, after the demolition of the hotel in 1968, some examples of these chairs are dispersed in different collections around the world. 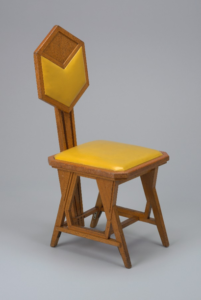