L.B. Jefferies, the main character in Rear window (1954), is a photographer with a broken leg who has to spend the whole summer resting because of an accident at work. Boredom makes him to spy on his neighbour’s daily activities and Hitchcock uses this situation as the starting point of one of his most remarkable and remembered films.

Although we might think the history of the wheelchair is rather contemporary, the first representations of furniture with wheels are found in Greek and Chinese art from the 6th century B.C. It is said that the first appearance of a wheelchair in Western Europe was due to the Spanish king Philip II’s mobility problems in 1595. From this moment onwards, wheelchairs started to be improved technically until the 1930s, when Harry Jennings, an American engineer, designed and registered the patent for his own wheelchair in 1937. Jennings and his friend Everest founded ‘Everest & Jennings’, an enterprise which monopolised the market for wheelchairs until the 1960s.

Thus, maybe Jefferies’ wheelchair could have been made by this company. 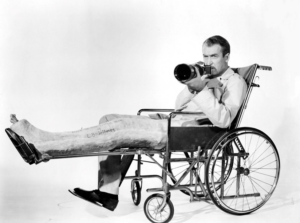