The origin of the Asante culture can be found in the Akan ethnic groups that inhabited West Africa around Lake Volta and the Gulf of Guinea. The Asante formed a strong confederation that developed from the late 17th century, with the founding of the city of Kumasi, and whose economy was based on trade, gold mining and slave traffic. They are the most important and larger ethnic group in Ghana and was one of the few African states capable of resisting European imperialism.

Within the material heritage and furniture of the Asante people, some of the most outstanding pieces are the ceremonial stools, being the Golden Stool (Sika Dwa Kofi) the main symbol of the Asante kingdom, which according to tradition, descended from heaven at the end of the 17th century and contains the spirit of their nation. Within the typology of the stools, we find specifically female pieces, the mmaa dwa. These are stools carved from a piece of wood, with a hollow central column and four corner supports, upholding a curved seat. Depending on the status of the owner, the complexity of the design could vary, including carvings and metal plates.

The stools mmaa dwa have traditionally been associated with women and queen mothers in the various local chiefdoms, being an attribute of their power, as only women can sit on them in public. Oral tradition attributes them symbolic values, such as references to the transmission of power through the queen-mothers. The stool is a symbol of female fertility and propagation and represents queen-mothers as a pillar of her community and family.  The link between furniture and owner is very close, becoming identified with his/her soul. In the case of the Asante stools, only the owner can sit on them throughout their life, and on their death, the stool can be placed in an ancestral shrine.

Photo: https://www.britishmuseum.org/collection/object/E_Af1954-23-3215. Photo credits: © The Trustees of the British Museum. 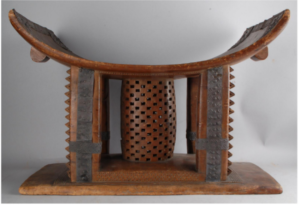