Tutankhamun, the last ruler of the royal line of the Egyptian 18th Dynasty, was the son of the Atenist Akhenaten and pharaoh during the New Kingdom (1334-1325 BC).

The rediscovery of his tomb by Howard Carter in 1923 is widely known due to the rumours about a curse. This tomb is also exceptionally relevant because of its well-preservation together with the number and variety of the items found there.

Within this treasure, several seats and thrones were discovered. This particular golden throne stands out among them as it is not just a chair to sit down, but it conveys a deep and extraordinary symbolic meaning.

Made of wood and covered with gold leafing, silver, glass and semi-precious gemstones, its legs simulate lion claws and present the heads of two of these animals in the front part, while the armrests show symbols of the unification of Upper Egypt and Lower Egypt such as the double crown and the cobras. The throne is complemented with a wooden footstool, covered with stucco and gold leafing, on which the enemies of Egypt are represented and trampled by the pharaoh’s feet. The back of the throne shows one of the most famous and intimate scenes in Art History: the young pharaoh appears sitting and being regaled with an ointment by his wife Ankhesenamon.

The throne meant, not only the link between the worlds of Gods and the people, but also majesty, stability, safety and balance. Since pharaohs were considered Gods on earth, it may not be difficult to imagine Tutankhamun imposing his divine will over the rest of mortals while sitting on this golden throne.

Photograph: “The Golden Throne” by Hull City Council is licensed under CC BY-NC-ND 2.0 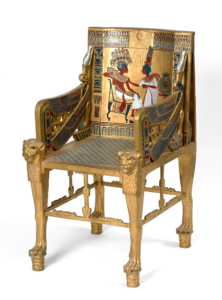