In the 70s of the last century, this wicker or rattan chair became an icon of sensuality and female eroticism thanks to the film Emmanuelle. So much so, that it ended up adopting the name of the protagonist and the film’s title. Since then, it has become a recurring object in photographs of prestigious fashion, advertising and art firms as a synonym for sensuality and beauty.

The origin of this chair is not clear, but it is believed that it was used as a royal throne in Polynesia and in the late 19th century it was discovered by the French, who began to use it in their homes in the colonies of the South Pacific. In France it is known as Fauteuil Pomare (name of the dynasty that ruled Tahiti) and in other places as Peacock Chair since its large backrest imitates the unfurled tail of a peacock. It is made of a single piece of wicker or rattan and filigrees, and although it was typically used outdoors, it has become an indispensable piece in interior decoration, as we see in the film. 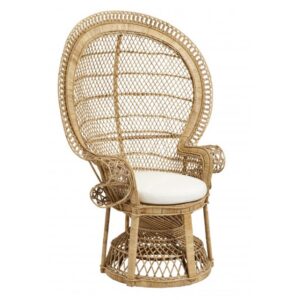