The people belonging to the Manteña Culture were the first to maintain contact with the Spanish colonizers who arrived to the coast of the current Ecuador in the 1526 year. Their social structure, agricultural crops and commerce of the Spondylus shell, in addition to their complex settlements, appear with singular amazement in the chronicles of the conquerors on that period. However, the studies about this culture were eclipsed and its trace practically erased and forgotten, as it happened with many other pre-Columbian peoples.

In 1907, the American archaeologist Marshall H. Saville is usually pointed out as the one responsible for “rediscovering” the Manteña Culture and “presenting it” to the Western world. The professor from Columbia University began the excavations at Cerro de Hojas-Jaboncillo where he unearthed, among other objects, about 60 chairs or U-shaped seats that were sent to the collections of the National Museum of the American Indian in New York.

These chairs, known today as Silla Manteña or Manabí, became the symbol of Manteña Culture and the territory where it was settled. The municipalities of the region currently use it as a commemorative element and tourist attraction, appearing their replicas in public monuments, interpretation centers, parades and local festivities.

The Manteña Chair was sculpted in a single block of zeolite or sandstone. It usually sizes about seventy centimeters high and its upper part forms an inverted arch, a kind of U that sits on a compact carved base, representing men or animals -usually a jaguar, a sacred animal, common to different pre-Columbian cultures. The shapes of the base are always presented with its four extremities touching the ground.

There are several hypotheses about their functions or symbolism. The most extended one suggests that the object represented a strong hierarchical component and it was a symbol of power in the manteña society: the zoomorphs were used by shamans in religious ceremonies, while the anthropomorphs were owned by individuals of high political or economic rank.

Photo: Seat by National Museum of the American Indian is licensed under CC 0 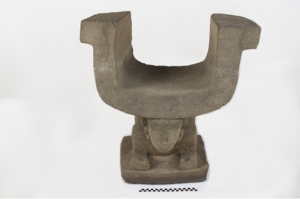