Bamum Kingdom was a pre-colonial state located in the northwest of present-day Cameroon. The Bamúm are an ethnic group of Tikar origin, who spread through the Grasslands territories and established a political entity in the 17th century, reaching its splendour around their capital, Foumban, along the 19th century.

The Bamum were a hierarchical society, in which the king (fon) was the highest authority. The use of certain materials, objects and symbols were monopoly of the monarch, who used them as a power symbol. This privilege could be extended to other levels of the hierarchy, which granted status to whoever possessed them, and showed the relationship between the king and his subjects, and amidst the monarch, the nobility and other strata. According to this, the Bamun kings´ throne is considered an excellent example of political art at the service of power.

The Bamum throne consists of several solid pieces of assembled wood, lined with a mesh of European glass beads and cowrie shells (mbüm) (used as currency, payment of dowries, etc.). The seat of the throne is cylindrical and carved with two-headed serpents (an attribute of royal power). At the back, attached to the seat, we find two human figures representing a pair of twins of both sexes who are monarch´s protective guardians, carrying ritual objects. At the front of the throne, a rectangular prism-shaped footrest is placed, which is carved with a frieze of subjugated enemies at the front, and spiders on the sides. On the footrest, there are also two warriors armed with rifles on both sides of the throne. This multi-coloured scenery creates an iconographic and symbolic atmosphere that envelops monarch´s events, emphasizing his earthly and spiritual power.

In 1902, the German colonizers approached to the Kingdom of Bamum. Unlike other Cameroon areas where the occupation was brutal, this territory remained relatively stable, thanks to the acceptance of the German rule and King Njoya´s pacts (c. 1860 – 1933). The Berlin Ethnologisches Museum, similarly to other European museums that were staring colonial art collections, tried to seize the throne through arduous negotiation between German military personnel in 1905. Finally, the fon Njoya agreed to give the throne to Kaiser Wilhelm II as a friendship sign, and ordered a throne copy for his personal use, which today remains in the Foumban Museum.

Nowadays, there is a debate about the return of African art pieces obtained by European powers during the colonization of Africa. 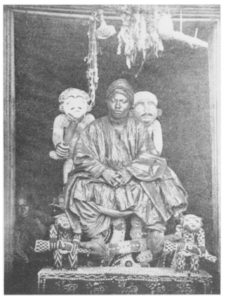