Ruth Reeves was a painter and an Art Deco textile designer. She was also an expert on Indian handicrafts. Evoking the ”the American way of life”, based on the American dream, Reeves made the “American Scene”, a textile that unlike the industry’s norm for furnishing fabric florals or formal brocades and damasks, celebrates everyday life. Scenes with productive work, sports, the happy family and the chair in many domestic situations.

Reeves combined imaginary rooms in a country house, where her given textile would have meaning.

The American Scene pattern recalls eighteenth century textiles with repeating groups of picturesque figures, surrounded by arabesques or foliage, however; this particular type of pattern was also typically used in Art Deco fabrics.

Reeves also referred to Cubism, Futurism, Folk and Tribal Art for inspiration. She took an eclectic approach in her design and choice of fabrics, she employed. Like many of her contemporaries, she embraced modernism, which served to move design away from old-fashioned historical styles and create sleek, abstract forms appropriate for modern life. She was able to incorporate both the modern and primitive in her designs that combined old and new, as a synthesis of primitive vitality and machine-age sophistication. 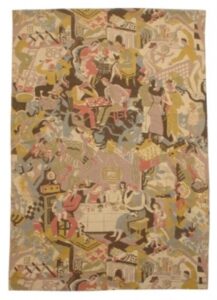