Since ancient times, women have given birth in an upright position, sitting or squatting, which is the natural way of expelling a fetus. Archeologically, delivery chairs are known in dynastic Egypt and Mesopotamia, and even in the Bible book of Exodus there is a reference to a piece of furniture for this purpose.

In all ancient cultures, midwives or relatives who assisted childbirth were placed at a lower level than the parturient, as it can be observed in this high relief of Ostia Roman Necropolis discovered in 1925. The woman who is giving birth is sitting in a wide chair with wide arms to lean on. Its shallow depth allows the midwife to be aware of baby’s arrival. Giving birth in a similar chair or in a squatting position remained as a usual practice in Europe until 18th century when childbirth medicalization began, since it was treated as a disease more than a natural act of delivery. Placing women in labour-on chairs or beds, in a lying or semi-sitting position with their legs up benefits doctors´ visibility, but do not favour women´s comfort or delivery speed. Currently, several designs, such as Relaxbirth, conceived by the Finnish midwife Elija Pessinen, rescue the delivery chair idea from antiquity, in which the woman in labor is sitting or almost squatting, which achieves a faster and less instrumentalized delivery. 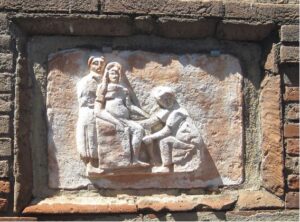