At the beginning of the 1960s, Yayoi Kusama (Matsumoto, 1929), a woman and artist, born and educated in the conservative and traditional Japanese environment, was fully introduced to the cultural environment of New York City, where the air of sexual liberation and counter-culture was beginning to be felt.

This confrontation between the traditional and the transgressive moulded her particular psychic condition even more complex, as she sought in the obsessive repetition of forms a comfort for her anxiety and hallucinations that had accompanied since her childhood. Moved by these impulses, Kusama transferred her obsession from the two-dimensional support, papers and fabrics used until then, to the three-dimensionality of sculpture. It was at this point that she began the production of a series of objects conceived under the title Accumulation.

It was not by chance that the element selected to start the series was an armchair (Accumulation n.1, 1962, MoMA). The artist chose an everyday object, part of the domestic landscape, the habitat per se of women. To the armchair, usually synonymous with comfort, she sewed by hand, one by one, filled and painted phallic volumes, until this repeated form dominated the object, sexualizing it fully. Later, Kusama accumulated the small protrusions in other furniture that flooded entire rooms, creating soft installations or sculptures that were fundamental in the conception of Pop Art, Performance and feminist claims in art. 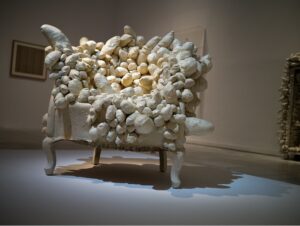